It’s certainly been a hectic month and I hoped to do this sooner, but I wanted to publicly discuss and thank some people for a recent experience I was privileged to have had.

On Thursday 16th May 2019, I took part in the MCM’s Sleep At The ‘G organised by the Melbourne City Mission – MCM. I was invited by Kirsten Van Diggele, one of the program organisers to experience only in part what it was like to ‘sleep rough’.

Kirsten, NailZ and I (The Bacon Warriors) along with all the other near on 2,000 participants were issued with our cardboard box and from there, staying warm was up to us. The night went on with different activities, a sensational panel discussion led by coordinators at MCM with the discussion on the complications of youth homelessness being facilitated by multiple youths who have lived this life all in varying forms and for varying reasons. Their stories were for the most part insightful, dramatic and yet full of hope for themselves and the future of mitigating youth homelessness. We were also treated to a meal of minimalism. Watery corn chowder and a bread roll. It tasted better than it sounds though AND we had margarine for our roll, so it nearly felt luxurious, considering the circumstances.

It was all sorts of conflicting. Watching the multiple events occur throughout the night to help pass the time and create a fun and engaging community event but all the while you know deep down that this is not the real thing. You are still no where close to the real experience and you feel a sense of guilt that you are there having a great time eating hot chips whilst the drummers dance past you rhythmically banging their drum line and winning jumbo connect 4 over and over because your strategy brain was on point that night (sorry NailZ). We wandered the grounds, we waltzed around mesmerised by the backdrop of the ‘G’, we mingled, we networked, we people watched and we most certainly learned a few things we never knew before about this community crisis. For example, at any given time, there is an estimated 6,000 young Victorians living in a state of homelessness (source MCM) and one of Melbourne City Mission’s goals is certainly to minimise this statistic through fundraising and education of communities near and far.

At 11pm, the lights went out and most of the crowd succumbed to the dark and curled up to do what they could to stay warm and get some sleep (this was most certainly challenging). It was cold (a balmy 4 degrees Celsius in Melbourne’s city), uncomfortable and the ground was hard (concrete) but this was only slightly close to sleeping rough. You see, we were all locked inside the grand gates of the MCG. We had security patrolling all night and for the most part, we were still safe and secure. Something that would elude us shall we ever actually find ourselves in the real world of homelessness. At one point, roughly at the 1am mark, I couldn’t bare to keep lying on the ground, so I took myself off for an early morning stroll to see the event in the eyes of the dark night. It was surreal but also heart warming to see so many bodies lying on the cold ground, committed to the experience. There were individuals, there were families including their young children, there were corporations and like us, there were just normal groups of people, all coming together to do what they could to show empathy and help even if just for one night to improve the livelihood of homeless youth in Victoria. 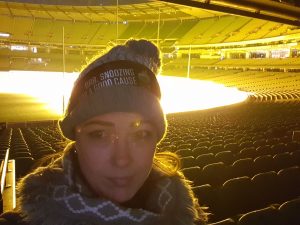 I eventually returned to my spot, everything still there, intact and secure. I lay back into my double fleeced sleeping bag and onto my pillow and realise that I, despite the discomfort am privileged. Not just in life but in this moment. My life challenges, although important, pale in significance by comparison of the youths experiencing the potential trauma of being young and left alone to survive. Yes, this sounds all very over dramatic I can hear you say but let’s face reality. How often would you put your hand up to sleep on a cardboard box in a dark park without security or protection from the elements or even worse, those who could bring you harm? Never? My point exactly.  It is dramatic. It is traumatic. It is a community crisis.

At 5am, the morning of the 17th May 2019, I awoke. It was officially my 39th birthday and I opened my eyes to the bright lights of the MCG and the immediate hustle and bustle of the participants (including ourselves) getting up to clean up and get out. We had the privilege to go home. Continue to feel safe. Continue to feel content and in all honesty, take a hot shower for as long as we wanted. Despite being tired and mildly sore from sleeping on the ground, we were ALL unharmed. We were not left physically or emotionally traumatised. Our mental health was for the most part left the same way as it was found upon entering the event but certainly ONE thing had changed. We, or at least I as I shan’t speak for others were now a damn sight more educated and aware of the situations many of Melbourne’s youth face when living through homelessness. I’ve learned that if you see them in the street, they would in many cases rather you sparked up a conversation than threw money at them relieving yourself of the confounding guilt you have or the hero complex you’d like to achieve by making a public notice about how generous you are as you take a selfie dangling a fiver over the head of a homeless person using them as your social media pawn as it is in so many cases. They care more about human connection. About being seen and not ignored as the stigma of homelessness dictates. Yes, the money being donated is also of help but having the opportunity to show they’re human and to be seen as human is just as profitable to their wellbeing. Yes, sometimes, that concept could be scary, you could be in a rush or you could feel intimidated but that’s when it becomes even more poignant to slow down, to go back when you’re not in a rush, to think of ways to break the ice and find a commonality that you might share and most certainly, to FU*K stigma.

The other thing I learned (which was more of a reminder for me as it might be with lots of new mothers), but a hot shower is most certainly … a luxury. No one should take them for granted.

One last thing, I’d like to say thank you to some people.

To those who donated, thank you.

To my teammates and newfound friends, thank you.

To Melbourne City Mission and all of those affiliated with the event (MCG and the Melbourne Football Club) thank you for the experience and all of the amazing work you do to educate and provide for our community. I will be back in 2020 with my what will be 9 year old son so that he too can learn how to show empathy and compassion for those in need.

Youth homelessness is intrinsically complicated but with a little bit of help and empathy we can make someone’s life a little less complicated and a lot of more hopeful for a brighter future.

And let’s remember… Winter is coming.